Last night me and a friend went to go see the Cirque Du Soleil show! It was so good. I've always wanted to go to a show, though my mom told me I went as a child, but I wanted to go to one that I would actually remember and I saw this as THEE perfect opportunity.

I've always been a fan of Cirque Du Soleil. I can't remember which station, but there was once a time when you could watch there shows on a network cable television station and I fell in love. It is so beautiful and artistic. Definitely better than any dance recital or circus that I've been too. The skill and talent is AMAZING and the set design was awesome too. You can tell that these shows and productions aren't something that isn't truly thought out. The show was awesome.

and of course I LOVE MICHAEL JACKSON so I knew every song that was sang. As I should. I'm a real fan. I heard that there was some bad reviews on the show but what are people expecting? For Michael to pop up on stage? I thought the that performers did a great job and I honestly think that if Michael was still here, he'd definitely be proud of the presentation.

Here are some pics 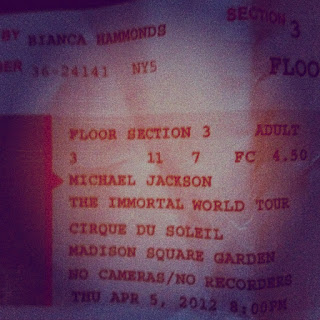 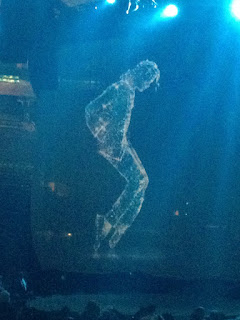 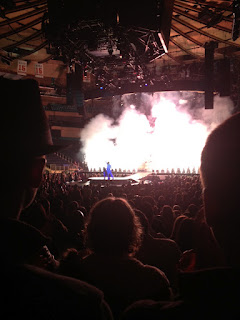 So we sat next to this young couple. Cute couple. They were white, not that it matters but since I'm setting the scene, I have to be detailed. Anywhos the guy seemed to be talking to ME the entire show. I sat next the girl yet he was leaning forward keeping conversation with me. It was funny and kind of weird but interesting at the same time. She didn't seem to get it though. During the show there was a time when the audience was standing and he switched places with her and stood next to me. There was also a moment where they were showing all of the different flags from around the world and me and my friend were guessing them and of course I was being silly just blurting out any country and the guy was next to me saying which countries were which. I thought it was pretty funny because he was so involved in everything that I was saying throughout the whole show. I don't really remember him having much conversation with the girl he was with. At the end I kept missing the photo opportunities and the girl next to me got a good one, so I asked her if she could send the picture to me and she said sure! So I was giving her my number so she can text me the picture and the guy leans over and tells me that he had a better picture than her. I smiled at him and looked at her and said send that to me! I'm not quite sure what he was doing there, but I was flattered. Like hugely. He was attractive and sly and that was slick of him. After the show finished me and my friend left, I got the picture via text and I said thanks for it.

Maybe that guy was just really nice. The girl didn't seem to be upset by his behavior or maybe she just didn't really catch on to his flirting. Didn't matter much to me. I'll never see him again. But I did go home with smile on my face because of him. Definitely unexpected.

Great New York night.
Posted by Bianca Lynn at 10:52 AM