This weekend was great!

Last night I went swimming at a friend's pool. We played Marco Polo, got on shoulders and tried to knock each other down, got dunked, jumped off diving boards, just had a ball. Nothing but laughter and fun. Two people were trying to turn on the grill and turned the gas up too high before lighting it and there were HUGE flames. They both got burned. This guy burned all the hair off his arm. It was hilarious! I mean it wasn't hilarious but it was pretty funny! Everyone started laughing. I'm guessing it was the shock from it all. They are ok nothing too serious. 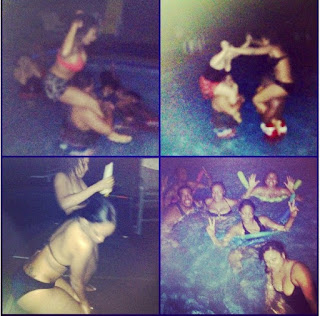 That's me in the upper left corner with the black swim suit on.

Good way to end an eventful weekend.
Posted by Bianca Lynn at 12:15 PM