.i never can say goodbye. 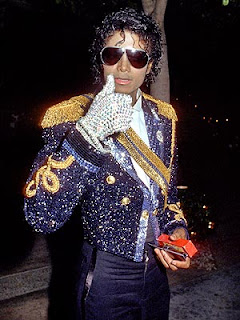 On June 25th, 2009 at 2:26 pm (pacific time), 5:26pm (eastern) The King of Pop, Michael Joseph Jackson died. I was walking on Broadway Ave in New York City when I got the text messages and the phone calls that told me the worst thing ever. As soon as I heard the news I didn't want to believe it but the tears started flowing. I called my mom and told her to watch CNN because CNN is just the place to watch, and she told me that he was in a coma, and that they haven't confirmed it yet. I called my divamommy and asked her because aside from her, there was no one else I knew that loved Michael the way that I did, and she told me that it wasn't confirmed. I was in shock. I was lightheaded I couldn't breathe, I started shaking, I got sick to my stomach and almost threw up and it was crazy because I don't even know this man. We've never met but he was so much apart of my life. Growing up everysince I could remember, I always listened to the Motown Christmas album with The Jackson 5's "Santa Claus Is Coming To Town" on repeat. I grew up watching HIStory on repeat on VHS, learning to dance and sing. I had this toy that a cassette tape could go in with a mic attached to it and I would sing "Black and White" as loud as I can. I learned to sing from Michael Jackson. I'm very well at imitating voices, and I learned at a young age to imitate his, and I swear that's how I learned. I was in my highschools version of "The Wiz" because Michael played the scarecrow. I have all his albums, every one of his cds. I'm just a fan. I've gotten in many debates about him when his whole trial process took place, but I always stuck by his side as a fan. I never made a mockery of him and always appreciated his talent. He was such a musical genius and a inventor of soo many things. He is the inspiration of most of the garbage we listen to. Though I'm mourning his death very so, I'm happy that he's finally resting in peace. He was nearly 100 pounds when he died and he's been living such a horrid life over the past decade. Yes he made choices that stunned the world, but he went through a lot. This is so hard for me to deal with. It's as if apart of me has gone with him. I always seem to cry the hardest once a man leaves my life - a great man rather. And he was definitely a great man. I never got to see him in concert, never got to meet him in person, but I loved him so. I pray that he's in a better place and that his family will be ok. I'm upset about his death but I want you to know that I am a true fan. People called me saying they are sorry as if I was apart of the family- that's how real I was to my fanship. I'm not coming out saying that I love him just because he was a great man that everyone knew, but I really do love him. I have it all to show. I just can't believe it. I cry so hard thinking of it. He was so young. Oh Michael, I can't believe you are gone.. :(

.I chose that picture of Michael because that was when he was at his prime. When he won 7 grammy's for his "Thriller" album which still even to today, stands as the greatest selling album OF ALL TIME.

Michael, your legacy will live on through me. My kids will definitely know your name and your songs just as I do.

Like A Comet
Blazing 'Cross The Evening Sky
Gone Too Soon

Like A Castle
Built Upon A Sandy Beach
Gone Too Soon

Born To Amuse, To Inspire, To Delight
Here One Day
Gone One Night

i will never say goodbye
...his music is still with me