.i need some me time.

.this week has been an interesting one. my roommate went home to Jersey to get her tooth fixed and she left last friday. here it is thursday and she's still not home. now i have no problem being alone, however i'd say by tuesday, i was lonely. there's a huge difference between being alone and lonely. i missed the companionship, the discussions, i missed laughing, or just randomly talking to someone. i don't want to seem like i can't live my life without her because that's not the case. i just believe that her leaving was the physical form of what i've been feeling inside. i keep repeating the word [change]. i'm so ready for it. i feel that i'm drifting away from so many people and it's not because i'm tired of them, but i feel like they are ready for the [change]. [change] is exciting yet its sad. you close one door and open another. i feel like i've been standing in the same doorway now for 4 years. sometimes you can't expect another person or the situation to [change], yet you have to look to yourself for the [change] and i feel like i'm doing it, while the circumstances are staying the same. i remain prayerful because i know that God is working on me and the things to come, however i've been in this funk for sometime. but patience is a virtue and that's one that i'm the closest to.

.i've been getting to know myself a lot lately. rediscovering my favorite fruits, colors, shows. reading and rereading classic novels. getting to know my body and the way that it is. introducing myself to the things that i like on different levels that i never imagined myself going. i even made a list about my friends and i wrote the good and the bad and it made me realize the kind of people that i attract and it made me realize the kind of things i want. and that's when i knew that i was lonely. i search for the same things majority of the time and what bothered me the most was the lack of complexity. but the positive thing about that is that i've already deaded them off. i slowly removed myself from the situation. if they won't [change] i will. -there goes that word again.

.someone sent me flowers. i don't know who it is. didn't say whom it was from. they are so nice though and it feels wonderful to be thought of.

here they are. they are tulips. 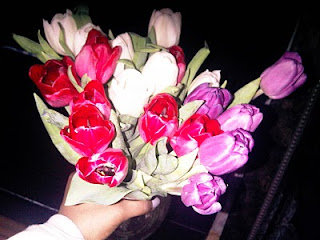 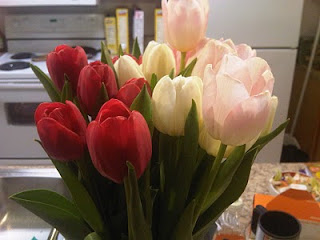 Your blog is very nice. It's very inspiring. Love the way you write...