.we're gonna make this a night to remember.

.first off, this has been an interesting 7 days. from last sunday until this sunday. i've heard from 4 old lovers, celebrated my friend's birthday, was totally depressed, crying my eyes out, to having a night that i faintly remember.

so last sunday night, two guys that i haven't spoken to in a while, texted me asking me to forgive them. one of them i totally ignored lol yea he didn't mean that much. the other, i responded and forgave him. this had to have been the friend that my horoscope was so annoyingly telling me to forgive. fine. but hearing from him wasn't what i expected and hoped for it to be. it was a let down, but it's ok. so i was kind of down. (i'm sure you can see my previous posts) as i wrote, i was waiting for something to happen! so my roommates birthday was March 25th. i brought in her birthday with her and 4 shots of Henny. (oh how i love Henny/Remy) and i started drunk texting/tweeting. i really wish i could take back those messages that i sent. my drunken decisions smh. but i can't take them back, i'll just move forward. hopefully the receiving end won't take what was sent so serious. haha my tweets triggered yet another person that i don't speak to anymore to contact me. spitting wack game in which i told him that it was game and that he should just stop. lol i guess he liked that because he called the next day. whatever, with him, it's just a lot of pretending and he talks to TONS of girls. i don't have time for that. so we (my roommate and i) finally get to sleep. when we wake, we go to school, then her friends came down from DC. we started pregaming at 830. i don't remember what time we got to the parties, what music was playing, who i spoke to, what i said and what time this all went down. i had 8 shots of ciroc and a personal henny. and i felt on top of the world. i wasn't sick and sloppy. i ran into that guy whose apology i ignored and basically asked who he was. hahaha we went to the waffle house and got kicked out because this man was recording us and i stepped up to him to shut that down. i remember saying "i didn't sign no waiver!" hahaha 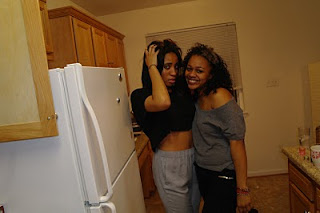 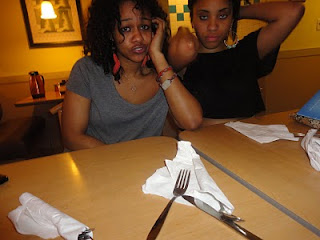 (pic from the beginning and the end of the night)


all in all, from this week, i've learned that it's about me. no more games. save the bull for someone who cares. i'm going to enjoy myself as much as i can.

i found it funny how everyone was apologetic, how everyone let me know how special i am, how we had good times. save it.
Posted by Bianca Lynn at 7:45 PM