.& the white man get's paid off of all of that. 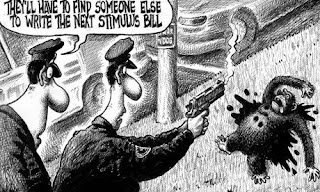 .im soo tired of hearing about the white man this or the white man that. I hear that constantly at Hampton. people really sit in classes and talk about how they still face racism in today's society. indeed racism still does exist- i'm not denying that. but to hear my peers talk about racism that happend to them as if it we were fighting in the civil rights movement is appauling. like my friend was talking about how she's afraid to get a job IN ATLANTA which is widely known for it's huge black success. like forreal girl? you can't get a job in Atlanta because the white girl next to you is going to get the job? ridicilous. nowadays, racism is taught rather than a feeling that has developed within us. blacks are racists against whites! that's evident by always thinking about white people thinking this or saying that about us, then we form opinions and develop feelings about something that we have no first hand experience with. then white people do the same! like the young people that planned on trying to kill President Obama. like dude you're what? 19 years old? why are you racist? it doesn't match up to 1989 or 1990 for you to have been born in a society that dealt with racism as your parents or grandparents did. i feel that RACISM EXISTS, BECAUSE WE ALLOW IT TO. if you stop drilling thoughts and stereotypes into people's heads, then there wouldn't be as big of an issue on racism as it is now. people are just afraid of what's inferior to them and that drives me crazy. they let things get to them and they build of fears and instead of embracing their fear, they try to down play it and hate it. it's so funny that america is a country that is free to do so much. we have women in power, the freedom of speech, the freedom of religion, yet we are some of the most disrespectful, ungrateful people in the universe. am i really and truly proud to be an american? are you truly proud to be an american?
look at what PROFESSIONALS posted today in the New York Post. that's outrageous! are they really serious? yes a woman was attacked yesterday by a chimp in Stamford, Connecticut but to have a police man shoot a monkey [which is an image that is synonymous to black people especially during the civil rights movement and SLAVERY!] and then say "they'll have to find someone else to write the next stimulus bill"? THIS MAKES ME SICK TO MY STOMACH! how many years do we keep pushing ourselves back? clearly they are talking about my man President OB. [yea we have nicknames for eachother] being that he just signed the bill lastnight!! no matter where you live, how high up or low down you are on the scale of living, to still possess such negative thoughts about another person is just amazing. it's truly amazing how people think.
.all in all check your self. please. my fellow american.